Did anyone else do this as a kid? And then the other person would follow it up with, 'punch kick for being so quick!' No? OK maybe it's just where I come from! I'm so glad we're finally in July. Not sure if it's just me but June dragged by so slow and I just wanted it over. I have lots planned to do with Willow in July that I'm excited about. Just small little activities to get her out of the house. Story times and crafts at the library, park and craft stores. Kidgets club at the mall. Kid museums including Kid City. Also, it's one month closer to Fall - which is my favorite season and I can't wait to take her and Ryder to all the fairs! She's gonna love it this year. 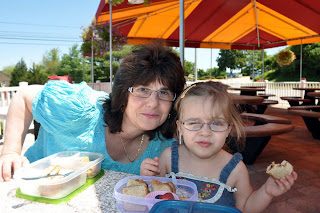 Today was another beautiful day. Me, Daddy and Grandma took Willow and Ryder to the Mystic aquarium as a treat. Here we are sitting outside at Macdonald's just before we went, eating the (bento) lunches I made for us. I know, lucky we didn't get kicked out. But we did get sodas! 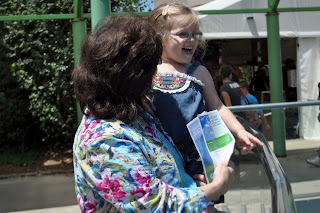 The first thing we saw at the aquarium; the beluga whale, was the by far Willow’s most favorite thing to see I think.  This is Grandma holding her as she watched it shoot water out of it's blow hole. She was also thrilled to pet and feed sting ray fish. Directly in their slimy mouths! At one point she grabbed one at the back and it flipped out thrashing a bit lol. I thought we would get into trouble but no one saw. We sat through a sea-lion show which lost her attention after a few minutes, too educational. 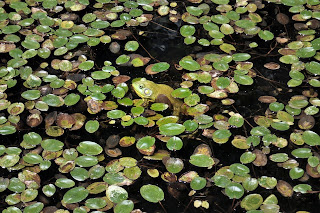 We saw sharks, which she loved and didn’t want to leave (because they are baddies in The Little Mermaid TV series), and all kinds of fish and coral, including sea-horses, turtles, eels, lobsters, frogs and the biggest tadpoles ever. I thought they were meant to be smaller than the frogs?? 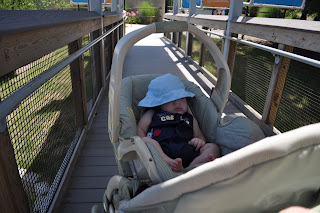 Poor Ryder. He fell asleep shortly after we got there and then stayed asleep the whole time. It was all too much!
So glad we went. It was such a nice family afternoon out. And I will definitely take her back again. Only next time I think I will have to bring one of those kiddy harness things to keep hold of her better as she rushes to see everything. 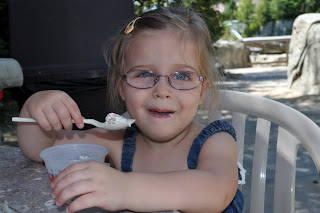 Good girls get ice creams :)
Posted by Kelly Polizzi at 1:06 AM

Hey hun, just stopping by to let you know I gave you a blog award.

So nice to meet you...thank you for your visit and kind words!