One thing that’s nice about Winter; slow cookers. It’s so nice not to have to worry about when to start dinner and when it’s going to be ready. Just throw it all together in the morning and eat at dinner time.

Stephen is in the church Cantata this year, same as last, and has been going to church most evenings to practice their songs so I’ve been trying to have dinner ready for him when he gets home from work. That way he can eat, rest and then go to church.

This was made easy using my crock pot today. This morning I woke up and got to chopping vegetables. Celery, carrot, potato and onion. I threw them in the bottom of my crockpot with some salt. Then I browned the roast (I used eye of round) in a dutch oven in hot vegetable oil on all sides, removed it and placed it on the veggies. Poured 1 ½ cans of beef broth into the dutch oven plus 1 packet of Lipton Onion Soup Mix and brought to a boil, scraping up all the flavor from the bottom. Once it had boiled, I poured the soup over the roast, placed the lid on the pot and cooked on low for 8 hours. 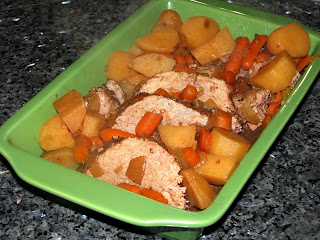 A flavorful, tender pot roast.
I did make some yorkshire puddings to go with it with the intention of taking a pic and posting the recipe but I wasn't too happy with how they turned out. Unfortunately at the same time I was making them the smoke alarm decided to go off in the kitchen. Willow got scared and started screaming and I was waving the broom infront of it like a mad woman trying to stop the dreadful alarm, when I wasn't sitting outside to get away from it. So I didn't make them my usual way. I just sort of threw the mixture in warm oil rather than hot and not concerning myself with how much grease was in there or how much batter. They were edible, just not pretty. Ahh well, next time.
Posted by Kelly Polizzi at 5:44 PM

Ah, the dreaded smoke alarm. I hate it when it goes off when I'm trying to cook.

Your roast looks delicious! You are such a talented cook and I'm learning a lot from all of your recipes and helpful tips! Thanks for sharing! :)

I use my slow cooker about once a week.Stephen my 13 year old son always loves the meat as it's so tender and he says oh yes when he see's it out.

wow thanks tea :) Glad you are enjoying the recipes. It's nice to read that after all the strange looks I get whenever I take photos of the food I make haha.