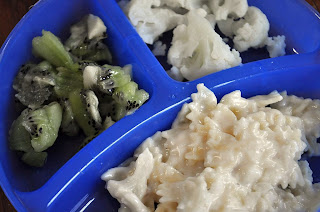 Left to right: kiwi chopped, cooked cauliflower florets, mac and cheese with cauliflower
I really like Rachel Ray and often watch her cooking show on TV but it's mostly just for her fun personality and useful tips that she offers while cooking. Often I find that her recipes, while they may be quick to cook, tend to contain too many ingredients for my liking. I'm a simple cooker! At least on an everyday basis, nothing wrong with trying extravagent recipes every now and then. But if there's an easy recipe such as peanut butter and jelly, Rachel will just somehow find a way to include grated raw nutmeg or, I don't know ... Indian cinnamon!

This recipe, however, is one I don't mind making differently. It's a basic homemade mac and cheese with cauliflower but the cauliflower is added for the purpose of sneaking veggies into your picky eater. And cauliflower just happens to be a vegetable that Willow won't eat. So I wanted to see how this would go over with her and made it for her lunch yesterday.

I didn't follow the recipe really. Just the idea. I boiled up some baby butterflies mini pasta with some frozen cauliflower florets and, in another saucepan, made a quick cheese sauce whisking equal parts butter/flour (1 tbsp) and estimating on the milk and cheese (shredded white Cheddar), sprinkled some salt and pepper in and then I mixed it into the pasta and smooshed the cauliflower so it wasn't noticeable.

Ideally, I'd like to not have to sneak the vegetables into her diet. I want her to learn to enjoy them whole so I took a few florets out to serve as a side to the mac and cheese and, to my surprise, she ate some of them! With a smile! She also loved the mac and cheese and asked for more. I don't think I'll ever make it plain again!
Posted by Kelly Polizzi at 9:44 PM

What a great idea!