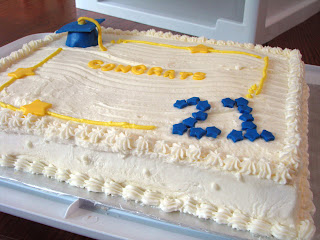 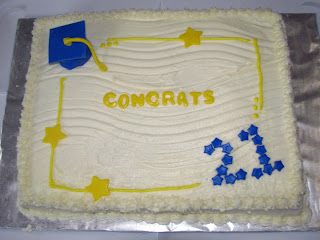 This cake is for Mike and Nick's party, which i will be going to shortly. It kept me up until 12 last night. Mostly because I kept messing up and had to refrost the top over and over. It's a white cake mix frosted with vanilla buttercream. The graduation cap is a mini cupcake wrapped in fondant. The top part of the hat kept breaking whenever I put it on the base, what a nightmare. Originally i wrote on the cake with frosting but my writing is awful, it looked like a 3 year old had scrawled on it so I ended up cutting out letters in fondant. Not happy with the neatness (wonky lines, smudged borders etc) but it's OK from a distance!
Posted by Kelly Polizzi at 7:47 AM

You done a great job! hope everyone liked it x