I thought it would be nice to make some homemade toffee to give away as Christmas gifts this year. I wanted to send some to family and friends in England, my Dad loves toffee I know, but hubby doesn't think this is a good idea. He reckons the toffee will melt and go weird during it's travels :( Maybe I'll just try it and hope for the best.
This is a really simple recipe I found online somewhere and adapted slightly that produces a delicious butterscotch toffee you won't be able to just have one of ... really. I'm not even a big toffee eater but I was munching on it while wrapping it up. It's easy to remember too, should you want to make lots. But this does produce quite a bit, especially if you cut it into little squares as I did.
Ingredients needed: 1 cup butter (2 sticks)
1 cup white sugar
1 cup brown sugar
1 cup light corn syrup
and 1 can of sweetened condensed milk
(1 tsp vanilla, optional)
Melt butter in a saucepan over medium-high heat.
Add remaining ingredients and stir until boiling. Make sure to keep scraping the bottom to prevent the sugar burning.
Once boiling, turn the heat down to medium and continue to stir non-stop for about 15 minutes. Good exercise for those arms!
If you have a candy thermometer, which I don't, clip it to the side of the pan and stir until it reaches 290 degrees - the soft-crack stage.
Pour the toffee into a buttered or foil-lined (and buttered) 13x9 inch cookie sheet and spread evenly. Allow it to cool down and then let it sit in the refrigerator for 15 minutes or so before cutting with whatever you have that works. Wrap the pieces in foil or plastic wrap. I did half of mine in regular plastic wrap and half in press 'n seal. 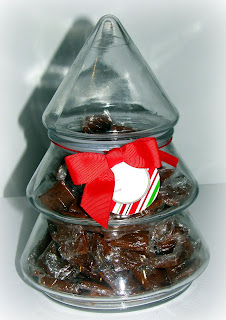 My little Christmas tree container that Stephen will be taking to his boss' holiday party on Friday. Should make a change from all the bottles of wine she'll likely get hah. 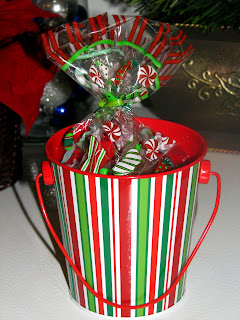 I filled a gift bag with some toffee and put it inside a matching bucket. 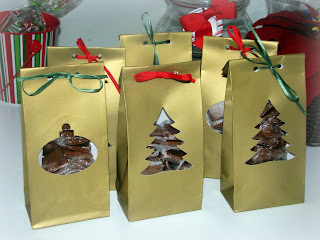 And I put some inside these cute little bags I got from the craft store. I have more than I know who to give to but I'm sure they won't go to waste. Although the above recipe does make a lot of toffee, I actually made two batches, one yesterday and one today.
I also took a pic of the ham/cheese sandwich I made for Willow's lunch today. I think she is getting to the age where she appreciates her food being cut into shapes with funny faces etc so I will probably start doing it more often for her. 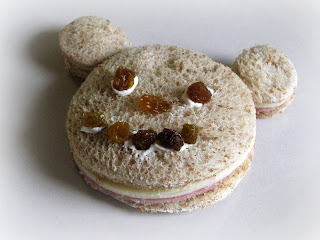 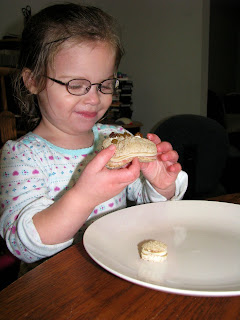 My monkey enjoying it :)
Posted by Kelly Polizzi at 7:27 PM

Wow, I'm impressed! You did such a good job with the toffee! It looks so pretty all packaged up! And I love that you put that song at the beginning of the post! So fun! :)

The little monkey sandwich is so cute too. I love monkeys! Your little girl is a *cutie* :)

Wow the toffee looks great, I really like the one in the little bucket.I'm not that in to toffee but my children and hubby love it.Willow is so cute.

Sounds like a nice easy recipe, you did a great job with all the different packaging, love the monkey sandwich lol, you will have to remind me of that trick when i complain to you about kyle not eating sandwiches lol.

This year on Mother's day during dinner my kids took turns talking about their favorite memory of me and I was shocked to find out how important making animals out of their food was to them. heehee. you're making memories!
p.s. the toffee looks amazing!!!!

Have a very Happy Christmas and new year.