I meant to post this the other day but between then and now I don't think there's been a second when Ryder has let me put him down! I was trying to come up with a fast meal for dinner (for the same reason - I'm not real good at one-armed cooking!) and Stephen suggested chicken fajitas. This may not be the typical way to make them - I didn't use any fajita sauce or anything, but it's how we like them and nothing beats fast and simple! 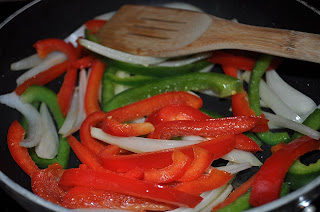 Ingredients:
2 boneless chicken breasts, seasoned with a little salt, pepper and taco seasoning
Soft tortillas
Red and green bell pepper
1/2 a large onion
Grill chicken breasts
Meanwhile stir fry the peppers and onions in a little veg oil until beginning to soften. Pat off any grease with paper towels.
Slice up the chicken when done and serve all on a tortilla with any extra toppings you like such as: cheese and sour cream etc. I like to just drizzle mine with some taco sauce. 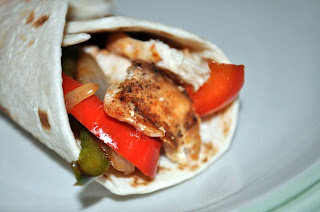 Posted by Kelly Polizzi at 7:00 AM