I am so happy its Friday today. Stephen has been pretty busy the past couple of weeks with work and events that he’s had to attend so it doesn’t feel like he’s been around as much.

Today in particular was rough. Willow decided to throw full-blown-feet-stamping tantrum after tantrum and kept saying, ‘NO!’ defiantly to everything I asked of her. Now, by the end of the night, I feel exhausted just from dealing with her. I was so eager to get her to bed I ‘forgot’ to brush her teeth. Sometimes it would be nice if there was a patience pill or something lol. Just for those hair-pulling emergencies.


Tomorrow should hopefully be better. My hubby is home all day (even if he is going to work down in the basement), we’re having pancakes for breakfast, Willow and I are making cookies for Grandma's Mother's day cookie bouquet and in the evening, we’re going out to dinner for Stephen’s brother Nick’s birthday and then maybe a movie afterward. At some point, Kelly - Stephen’s brother Mike’s girlfriend (and my future sister-in-law I hope!) is coming over to make a mother’s day cake with me. Yes, a good portion of the day should be spent in the kitchen lol. 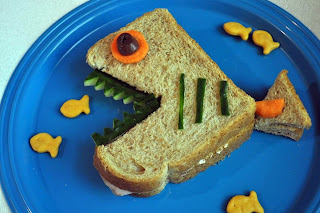 .... a shark sandwich!
Or, as Willow called it, a BADDIE sandwich. She loves all cartoon villians and said this was the shark from The Little Mermaid show she watches on TV. I think it looks more like a Piranha.

It was originally created by Smita on the little food junction blog. Her's does look like a shark and there are lots of other kid-friendly sandwiches etc on her blog. I can't wait to try out more!

Sometimes I wonder who I do this for lol.
Posted by Kelly Polizzi at 8:50 PM

Wow, this looks so neat!

Glad you'll have your husband nearby tomorrow. It is hard when the little ones decide to throw fits all day. We've had those days too. :)

You make the cutest lunches! I wanna come eat at your house. ;) My son is just about 16 months so he really doesn't care what his food looks like yet. I'm glad you posted about the pork tenderloin too, I'd been wanting to try that. Love your blog, hopped over here from Tea!

thanks LeAnna. Just you wait, he'll be asking for baddie sandwiches too soon!

You find some of the most creative kiddie meals. This one is great. Hope you enjoy your Mother's Day weekend.