Ahh Mondays.
Even though I don't work - at least outside of being a homemaker ;) I still dislike them.  At the weekend I do not keep to the same standards of housecleaning, I'm a bit more relaxed. I'll keep the dishes done (for the most part) and the house generally tidy but I rarely do the laundry or pay the floor much attention and I'm OK with toys being around. At the weekend, I like to enjoy spending time with my hubby and that is usually when we'll get to go out together or with the family. I also concentrate on long put-off projects (such as cleaning underneath Willow's bed or my kitchen junk draw). And then, on Sunday, we have church. So Monday, for me, is back to work on the chores and back to being hubby-less during the day :(
I think I did a pretty decent job this weekend though with keeping things spic and span so I had extra time to play with Willow today. We pretended she was a baby bunny and I was a daddy fox. She had me chasing her in and out of the tent we built with some blankets hanging over the coffee table. She also painted a little wooden box from the craft store to put her jewelry in and enjoyed having me watch her.
I'm going to make more of an effort to have the house tidy in the evenings before bed so that I can relax and spend more time enjoying my babies. Time is flying by quickly, I know it.


Here's the lunch I made for her today. A bologna monkey sandwich which I cut out with kitchen scissors. And some cucumbers and chopped canned peaches. She left the cucumbers and also decided she's done with bologna! 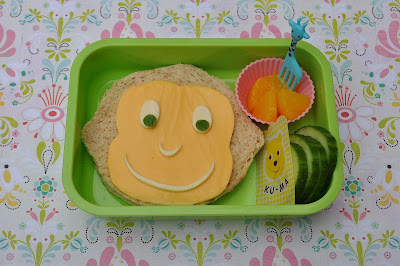 Your better than I am Kelly at being persistent with introducing new foods. Your Monkey is really cute and I'm surprised how smoothly it looks from using the kitchen scissors! I know. I've tried it before and it's not easy. Hey, I'm also glad your reconsidering trying the squirt bottles and pancakes again! I hope my tutorial helps...and you can always ask me anything to okay?!! It really is tons of fun and I know you'll love it!

Thanks Jenni, I think it has more of a smooth appearance because I first rolled and flattened the bread maybe.

Thanks for being so helpful with the tutorials and questions. You are very inspiring! if they turn out worthy of taking a pic, I will post them! lol

I just subscribed to your blog very handy for me!

It is nice to spend time with them playing at Willow and Kyle age it so much fun, but housework can easily get in the way and time fly's by and you end up missing out.

Cute monkey face! It is SO hard to balance keeping up with housekeeping while completely absorbing and relishing this special time in our young ones lives...sigh...